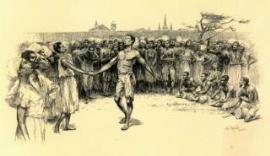 "Voodoo on the Bayou" is the true story of Marie Laveau, the Voodoo Queen of 19th century New Orleans, told from stories, interviews and newspaper clips about her and voodoo practices. The musical brings the voodooienne to life through vignettes punctuated with voodoo dancing and drumming. It is the story of a magical person with a spirit that refuses to die. According to her obituary in 1881, "Marie Laveau's name will not be forgotten in New Orleans." Truer words were never printed. 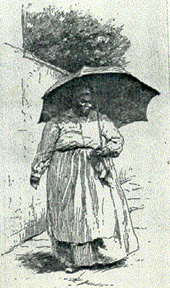 Not only does the musical move back and forth between present day and the time of Marie Laveau but it also switches between the spiritual realm and the real world through the incorporation of voodoo deities as characters and traditional voodoo ceremonies.

In Act I we see Marie discover, by fate, who she is and ascend to the thrown of Queen of the Voodoos while in Act II she truly evolves into a spiritual being through experiencing the pain and suffering of those who come to her for help. Marie's wish is granted and she comes to see the divine as do, hopefully, we.

The opening song "Voodoo on the Bayou" finds the audience participating at The Night of the Voodoos on St. John's Eve at Bayou St John. Next we join a cemetery tour introducing us to Marie Laveau at her tomb and encounter the Guedehs, the voodoo deities who live there.
We see Marie in her daily Creole life as a hairdresser and voodoo practitioner interacting with colorful clients, associates and more voodoo deities. A rivalry develops with a voodooienne, Rosalie, creating a legal dispute. This is settled in court along with some other humorous voodoo cases. Marie is found not guilty and in the final scene of Act 1, she ascends to the throne and becomes Queen of the Voodoos.

Act II immerses us in historical New Orleans and opens with Marie comforting two condemned prisoners in their cell. The next day we attend their execution that goes awry. This is the last public execution in Louisiana. We discover this at a political rally while "Running on the Hoodoo Ticket."
Marie is a great healer and nurse. Her skills in voodoo are put to the test during the great Yellow Fever epidemic of 1853. We find Marie praying in church for those afflicted. Years later Marie dies and we attend the funeral with the exotic citizenry of New Orleans but Marie refuses to stay buried. To this day her spirit returns every year on The Night of the Voodoos on St. John's Eve at Bayou St. John. We witness this as tourists when the musical ends with a reprise of "Voodoo on the Bayou."